We are guided by our vision of ‘SERVING HAPPINESS’ and believe that homes transform lives, keeping this vision very close to our heart, We have been able to create landmark development in the field of construction company by starting the new venture SEWAKRAM REALTY. In which we have covered Residential, Commercial, Industrial, Layout Development and many more.

This year we SEWAKRAM REALTY takes the honor to raise a complete world that brings fulfillment to life. Our mission is to keep growing every year fulfilling the dreams and desire of our clients and turn them into reality. We will continue to be a brand that people trust, the brand of commitment, the brand SEWAKRAM REALTY.

Why to Choose Us

We are unique in design and are a professionally managed company. We are trustworthy and flexible with our clients. We have experienced set of engineers team and skilled labors with us.

A Youth Icon Who Wants to Scrape the Sky 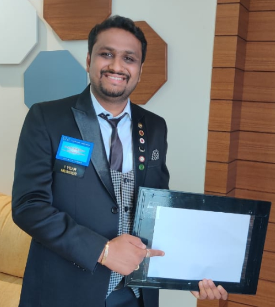 Er. Karan Agrawal, BE (Civil), Best Civil Contractors in Hubli, as the promoter of Sewakram Realty, is possessed with a lot of guts and gumption. Civil Contractors Services in Hubli he decided to become a civil engineer inspired by his maternal uncle Bajrang Agrawal, a successful builder in Mumbai. Karan meticulously worked towards fulfilling his ambition of becoming a reputed Civil Contractor with his own area of specialization and today stands tall as a youth icon for his achievements in the various domains of construction as well as civil engineering projects at a young age.

He now strongly nurtures the goal of making Civil contractors company in Hubli, Dharwad as a land of skyscrapers and with due diligence hopes to put the two-tier cities among the tall maps of India in the construction segment. His desire to reach out to the sky has been fuelled by the success that he has achieved in a short span of time.

At present Er. Karan Agrawal is member of association of civil engineers,  proud member of TIECON Hubli 2021. He is an active member of Business Network International (BNI). His enthusiasm to involve in BNI activities ensured that he soon became Director followed by becoming Secretary, Treasurer and President of BNI Grandeur Chapter.

Er. Karan Agrawal is Cochair of “Young Indians” (Yi) Hubli-Dharwad, with an aim to participate in the activities for the development of society. He is the Director of Shri Siddharoda Swami temple kundgol and also the Member of Association Engineers.

Karan’s grandfather Sewakram Agrawal migrated to Hubballi from Rajasthan in 1964, he laid the foundation for the Sewakram Group by foraying into the grocery business. Honest hard work with a strong team effort were the mantras for his success and his sons, including Karan’s father Arunkumar Sewakram Agrawal, imbibed those qualities to nurture the business and uphold the family tradition under a single entity aptly named as Sewakram Group.

The business has now branched off beyond Civil Construction engineering in Hubli, Dharwad, and other cities of North Karnataka with extended members of the family ensuring that the name of Sewakram is upheld at the highest level as a tribute to the man who ensured that the family would settle down to a nicety in Hubballi. Ever since the Group has held on to its identity with extended family members running various entities as independent units but all bound by the staunch principles of Sewakram.

Along with completing his BE graduation in 2014, he also finished two projects and was thus ‘industry ready’, unlike his other friends who were only theoretical oriented. But he decided to join BM Associates, the structural engineering in Hubli Dharwad firm of Mr. B. Mahesh, one of the most reputed Commercial Civil Contractors in Hubli,Dharwad. He endeared himself to his professional mentor Mr. Mahesh by walking the extra mile. His mentor was also aware that he was on a learning curve and would not be associated with the firm on the long-term. Yet he mentored him with the industry best practices so that he could gain the confidence to venture out on his own. At the young age of 20, he was made the Director of Agrawal Samaj and became a Secretary of the Samaj at the age of 24. He continues to serve the Samaj as Secretary for more tan 6yrs.

He feels greatly indebted to his Avinash Mahajan for handholding him in his initial years and Mr. Santosh Bhansali for reposing confidence and trust in his abilities with a Rs. 18 lakh project in Rayapur in Hubballi. He laid a strong foundation for his career with his very first brick and in a short span of five years has gone on to complete 25 projects comprising of industrial projects, warehousing, cold storage, commercial building, residential villas and residential apartments. He has also completed three of his own commercial and residential apartments named Sewakram Heritage, Sewakram Amantra and Sewakram Airview. He feels grateful to all those who supported him in his initial years, including his family, members of the Agrawal Samaj, BNI members and well-wishers.

They have a vision of supplying finest quality products at the most Reasonable prices to the consumers with this vision they are working to enter in to the manufacturing sector so that they can serve the society with the best prices at A grade quality….

Started up with sewakram agencies, grew to sewakram marketing in the field of whole sellers & Traders, are now leading in the twin city as the top 10 traders of oil, sugar & wheat merchandise. It is managed by Mr. Arjun Agrawal.

They have a vision of supplying finest quality products at the most Reasonable prices to the consumers with this vision they are working to enter in to the manufacturing sector so that they can serve the society with the best prices at A grade quality….

With an aim of supporting people During this pandemic Sewakram Charitable Trust has distributed free Ration kits to the mechanics of small garages of Hubli.

With an aim of fighting against Covid-19, sewakram charitable trust has supported “young indians” (Yi) by donating mask vending machines.

Having tested waters in the various segments of the construction industry, he has found his niche in pre-engineering buildings (PEB – in fact his present office is a PEB structure) and industrial buildings, including warehouses and cold storages. He already has nine ongoing projects in the industrial space as well as commercial and residential space. His office comprises of 15-member staff, including 12 engineers. The Sewakram Group as a whole has a staff strength of more than 50.

Message for the youth

He advocates youth to have fixed goals and achieve the same with a positive approach in life. They should count on the blessings of their elders in the family and strive hard to uphold traditions by setting achievable benchmarks. It is okay to dream, but just dreaming along would not suffice, the youth should ensure that they convert their dreams into tangible results for the good and betterment of society as well as their families.

Sewakram Realty based in Hubli is a prominent and key player in Real estate construction and contracting business. We are catering to wide range of construction services from residential buildings, commercial properties, industrial projects such as cold storage construction, warehouse building, and road constructions.